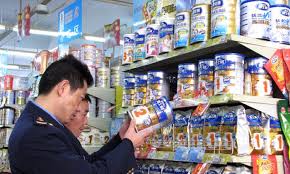 China's State Administration for Market Regulation (SAMR) has issued warnings to consumers about the safety of certain fermented foods following a severe food poisoning incident in Heilongjiang province last year when nine members of a family died after consuming home made fermented maize noodles. The cause of the fatalities was a respiratory toxin produced by Pseudomonas cocovenans. There were other severe local food poisoning outbreaks from other home made fermented corn noodles, fermented rice noodles and an edible fungus. Hence, SAMR have warned against consumption or sales of home made fermented products.

The Chinese Ministry of Public Security issued data on 1,400 cases of counterfeit food investigated from May to November 2020, and thought that the move to online shopping made fraud easier. There are two types of fraud. One type is registering a trade mark very similar in name of a branded product to cause some confusion when purchased by the consumer. The other is the direct counterfeiting of a label of a branded product. As an example of the latter, Penfolds wines have been the victim of counterfeiting in China for some years and which is thought to have been worth almost US$ 20million.