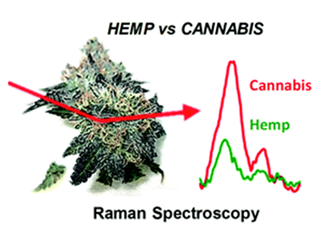 In the US, hemp plants (Cannabis sativa) that produce delta-9-tetrahydrocannabinolic acid (THCA) in amounts higher than 0.3% are classed as cannabis, and lower amounts than 0.3%, as hemp. THCA is the precursor of the psychoactive delta-9 tetrahydrocannabinol (THC) that forms from its oxidation. At present, confirmatory testing whether a sample is cannibis or hemp has to be carried out in a certified laboratory by HPLC, which is time consuming and labour intensive. US researchers have developed a rapid portable, confirmatory, non-invasive and non-destructive approach for cannabis diagnostics that could be performed by a police officer using a hand-held Raman spectrometer.

Samples were taken from both hemp plants and 3 varieties of cannabis plants, and the latter were frozen at  −10 to −15 °C and thawed, which is the standard procedure in cannabis farming that is used to preserve cannabinol content of plants during their post-harvest processing. The Raman spectra were analysed using orthogonal partial least squares discriminant analysis (OPLS-DA) to determine the spectral regions giving the best separation between the two classes especially for THCA. The chemometric model showed 100% accuracy in determining whether a sample was hemp or cannabis, and further modelling gave a prediction rate of 96-100% in identifying the three cannabis varieties.