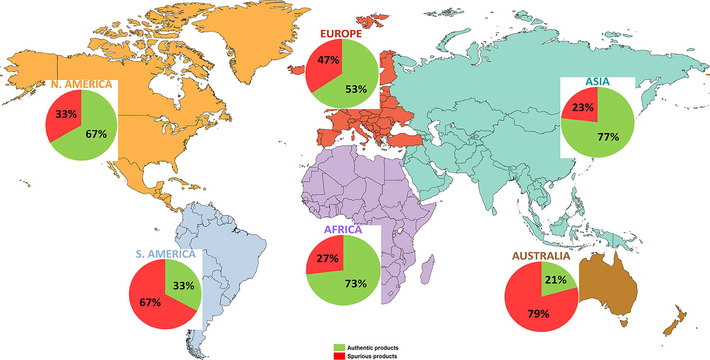 The herbal products, sold worldwide as medicines or foods, are perceived as low risk because they are considered natural and thus safe. The quality of these products is ineffectively regulated and controlled. The growing evidence for their lack of authenticity is causing deep concern, but the scale of this phenomenon at the global, continental or national scale remains unknown.

Reserachers analysed data reporting the authenticity, as detected with DNA-based methods, of 5,957 commercial herbal products sold in 37 countries, distributed in all six inhabited continents. The global survey shows that a substantial proportion (27%) of the herbal products commercialized in the global marketplace is adulterated when their content was tested against their labeled, claimed ingredient species. The adulterated herbal products are distributed across all continents and regions. The proportion of adulterated products varies significantly among continents, being highest in Australia (79%), South America (67%), lower in Europe (47%), North America (33%), Africa (27%) and the lowest in Asia (23%).

With many reports of increasing levels of fraud in the organic food sector including from The Grocer in March 2018, the IFST statement on organic food is a useful guide that looks at current EU rules related to organic food, explores how this type of food should be labelled and advises on where to begin if a food business seeks to move into organic food production.

It covers the following areas: Less than 1% of the world's vanilla flavour comes from real beans.

Scientists have been making synthetic vanillin - the compound that gives vanilla its aroma - since the 19th Century. It has been extracted from coal, tar, rice bran, wood pulp and even cow dung.

Today, the vast majority of synthetic vanillin comes from petrochemicals.

It can be 20 times cheaper than the real thing.

The burgeoning interest in “artisanal” food made in a traditional way explains some of the demand for natural vanilla. But much of the rocketing price can be put down to food rules on both sides of the Atlantic.

In Europe and the United States, ice cream labelled “vanilla” must contain natural vanillin extract from vanilla pods. If the flavour comes wholly or partly from artificial sources, the packaging must say “vanilla flavour” or “artificial vanilla”.

Vanilla from vanilla pods will have a taste and potency unique to the area in which it is grown, much like wine. The vanilla from Madagascar has a distinct rummy taste and sweet aroma, which is why ice-cream makers choose it over vanilla from other countries.

And there is more and more pressure on food companies to switch from artificial vanilla to vanilla beans. Big corporations such as Hershey and Nestle have started buying natural vanilla extract for their products in large quantities, which injects more demand into the limited supply chain and raises prices further.

Over the past decade, vanilla prices have gone through dramatic booms and busts.

Madagascar’s 80,000 growers produce more vanilla than any other country - so what happens on the island affects the global industry.