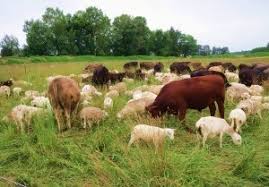 This study has determined the isotopic ratios, i.e. of oxygen and hydrogen isotopes, of Slovenian milk and its major constituents: water, casein, and lactose. In addition, the oxygen isotope ratios of cow, sheep, and goat’s milk were compared. Oxygen isotope ratios in milk show seasonal variability, and are also 18O enriched in relation to animal drinking water. The δ18O water values were higher in sheep and goat’s milk when compared to cow milk, reflecting the isotopic composition of the drinking water source, and the effect of differences in the animal’s thermoregulatory physiologies. The relationship between δ18O milk and δ18O lactose is an indication that even lower amounts (>7%) of added water to milk, can be determined. This approach could be a possible confirmatory method to determining added water in milk to the freezing point method.