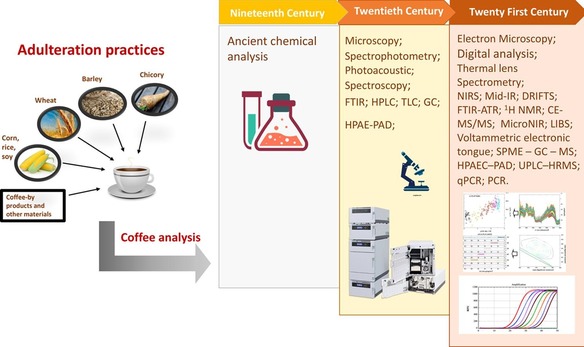 As the popularity of coffee as a beverage in Europe grew in the 18th century, so has its vulnerability to adulteration and fraud. This review looks at the changing methodology to uncover adulteration and fraud over 3 centuries. It focuses on the discrimination between coffee and other foods or between coffee and its by-products. The earliest chemical, physical and microscopy methods are presented followed by methods developed in the 20th and 21st centuries using chromatography and spectroscopy associated with advanced statistical tools, and DNA-based methods. The earliest adulterant studied was chicory, but from the 20th century onwards, maize, coffee by-products, and barley were the most studied, followed by chicory, rice and other food items. Most methods have low sensitivity, and are adversely affected by matrix effects, especially degree of roasting.