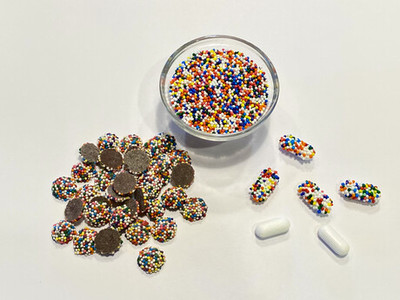 Prof. Grover at the University of California, Riverside has developed a coating technique called CandyCode, which could prevent counterfeiting of food and pharmaceuticals. The technique was developed by coating pills with coloured  "hundreds and thousands". The unique pattern of colours created on the pills acts as an "edible barcode". In assessing how unique the coated pills were, and how many variations would be possible, a computer simulation was used of even larger CandyCode libraries, Prof Glover found that a company could produce 41 million pills enough for each person on earth, and still be able to uniquely identify each CandyCoded pill. A pharmaceutical producer could cover each pill it produced in the tiny coloured candies, then uploaded a photo of it into its system, and consumers would be able to guarantee that a pill is genuine by scanning their drugs using a smartphone app. The technique can be applied to other mediums such as bottle caps for fraud protection of wine, olive oil etc..