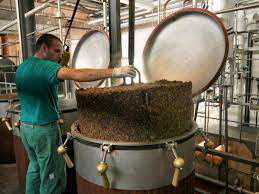 "Grappa" is a traditional Italian spirit drink produced from the distillation of fermented grape marc and seeds after winemaking. In the EU Spirit Drink Regulations, "grappa" is a protected name, and it has to be produced from Italian cultivated and processed grapes. Italian researchers have developed a method to authenticate "grappa" using alcohol measurement and gas chromatography analysis of the volatiles on 123 spirit samples. Of these, 43 were "grappa" and the others were spirit drinks from wine, grapes, apples and pears. The samples were divided into a training set (94 samples) of a chemometric model using linear discriminant analysis (LDA), and a validation set (29 samples) was used to test the model and gave good discrimination between the different types of spirits.

Two suspicious samples of "grappa" seized by Italian customs were also examined and analysed. Visual examination revealed differences in the cork closures and barcodes. The analytical results on the chemometric model indicated the two samples were wine spirit rather than "grappa".  A further chemometric model was calculated, based on principal component analysis (PCA), which indicated that the two samples were different from wine spirit, and it was concluded that they were an adulterated "grappa" rather than wine spirit. The adulteration was not identified, and further investigation is required. However, the approach developed in this research would serve as a rapid test to authenticate "grappa", and samples not fitting the chemometric models would require further analysis if not fitting exactlyinto the different types of spirit. It is also a useful exercise in developing a method to verify a protected name in food law.