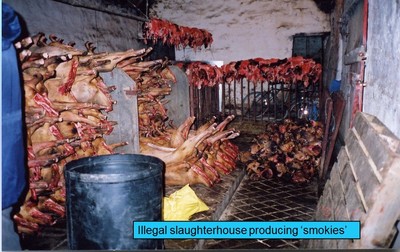 The production of “smokies” involves the illegal slaughter of sheep, which have their fleece retained on the carcasses, and burnt with blow torches to impart a smoked flavour to the meat. The illegal trade in “smokies” is a serious public health risk, as the meat is often infected with diseases and parasites that could pass to those people who eat the meat. The animals are also killed inhumanely with no regard to their welfare, hence this process is illegal in the UK and many European countries.

Robert Thomas was found to be part of an organised crime group (OCG), who were involved in running an illegal meat operation, where “smokies” were being prepared for human consumption. Mr Thomas was initially prosecuted in 2015, but lied about his assets. He was extradited from Ireland in February 2022 and prosecuted in June 2022 for perjury. However, it appears that Mr Thomas will be subject to further legal proceedings.