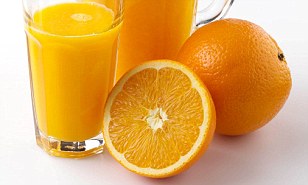 Given the price differential between NFC (not from concentrate) and FC (from concentrate) orange juice, the vulnerability of substitution of NFC by FC orange juice makes it important to have methodology to distinguish between the two type of processed juice. In this study, the differential compounds between NFC and FC orange juice prepared from 5 different orange cultivars and 4 sterilisation methods were identified using untargeted screening by UPLC-QTOF-MS (Ultra Performance Liquid Chromatography - Quadrapole Time of Flight Mass Spectrometry) and machine learning. Combining principal component analysis and orthogonal projection to latent structures discriminant analysis, 11 differential compounds for NFC and FC orange juices discrimination were identified, and used to discriminate between NFC and FC juices using targeted LC-MS methodology.