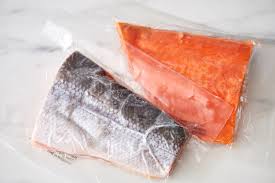 Labelling rules require that if raw fish has been previously frozen and sold as chilled/fresh, then it must be labelled as previously frozen or defosted. Norwegian researchers have developed a method based on D/H-NMR analysis to look at certain metabolites, which change concentration when Atlantic salmon is frozen and thawed, then stored chilled. Of the metabolites studied, aspartate concentration was considered the best marker for previously frozen salmon, as it formed in the thawed fish only after the second day of storage at 4 °C, reaching a maximum after 3-5 days then declining.

Read the article and the abstract.