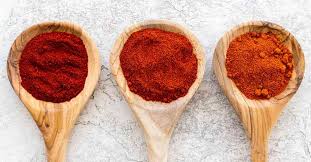 This study evaulated the feasibility of using non-targeted UHPLC-HRMS (ultra high pressure liquid chromatography coupled to a high resolution mass spectrometer) fingerprints as chemical descriptors to address the classification and authentication of paprika samples. Fingerprinting data based on signal intensities as a function of m/z values and retention times were registered in negative ion mode using a q-Orbitrap high-resolution mass analyser, which targeted mainly the polyphenols and phenolic acids in the paprika. The fingerprints were subjected to unsupervised principal component analysis (PCA) and supervised partial least squares regression-discriminant analysis (PLS-DA) to study sample discrimination and classification.  A total of 105 paprika samples produced in three different regions, La Vera PDO and Murcia PDO in Spain, and the Czech Republic, were analysed. Non-targeted UHPLC-HRMS fingerprints were able to authenticate paprika production regions with 100% sample classification rates by PLS-DA. In addition, the obtained fingerprints were also able to discriminate between the different paprika taste varieties in all the studied cases, even in the case of La Vera PDO, which has sweet, bittersweet, and spicy tasting paprika, which are produced in a very small region.