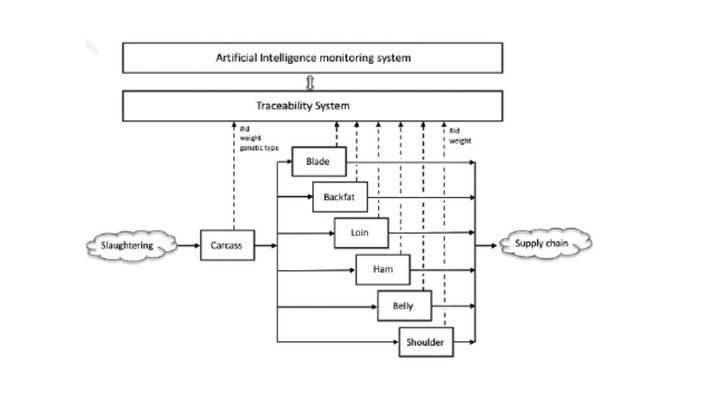 This paper proposes an innovative method based on AI, to reinforce traceability systems in detecting possible counterfeiting by product substitution. It is an item-based mass balance method that analyses the agreement of the traceability data flows not by using explicit (even stochastic) rules, but by exploiting the learning capabilities of a neural network. The system can then detect suspect information in a traceability data flow. The AI-based method was applied to a pork slaughtering and meat cutting chain case study, and used the weights of different cuts of a pork carcase as the training phase of AI. Any analogous carcase information along the supply line might indicate substitution or modification of the pork carcase cuts. 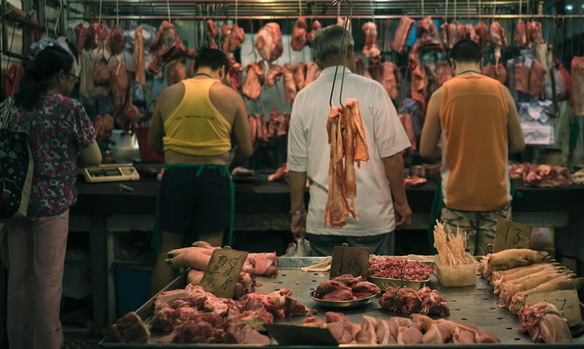 The Chinese Meat Research Centre has compiled 1,817 reports of fraud and adulteration in the meat and meat products sector recorded by the national and imported food inspection services, as well as media reports between 2012 and 2021. The study covered fresh and frozen livestock, poultry, and various processed meat products. The 1,817 reports of fraud/adulteration can be broken down by 670(33.72%) cases from domestic information of official sampling inspections, 773(38.90%) cases were from imported meat and meat products rejection notifications, and 544(27.38%) cases were reported by the media. The study breaks down the cases into the individual types of fraud including artifical enhacement (adding unapproved additives to enhance the quality of meat/meat products), substitution (substituting original or labelled meat with spoiled meat or by-products, or other meat species),  mislabelling (including missing information, changing durability dates), counterfeiting branded products, dilution (adding water usually by injection), illegal imports (no health or origin certification), and certification fraud (health certificate forgery or alteration). The study revealed that the highest number of fraud cases was by artifical enhancement, followed by illegal imports, and then substitution, the total of which accounted for 97% of fraud cases.

The Food Standards Agency (FSA) and Food Standards Scotland (FSS) are today advising consumers that some food products labelled as containing sunflower oil may instead contain refined rapeseed oil. This is happening to maintain the supply of certain food products containing ingredients that have become increasingly difficult to source because of the conflict in Ukraine.

The majority of the UK’s sunflower oil comes from Ukraine and food businesses here are reporting that supplies of sunflower oil are likely to run out in a few weeks with some businesses already experiencing severe difficulties.

This has led to some food manufacturers urgently replacing sunflower oil with refined rapeseed oil before being able to make the change on the label. We are therefore advising that food products labelled as containing sunflower oil may instead have been produced using refined rapeseed oil and consumers should look out for additional information being provided by retailers and manufacturers  to stay informed.

The FSA and FSS have published the rapid risk assessment into the substitution of sunflower oil with refined rapeseed oil as part of their commitment to making public the science and evidence underpinning their advice and guidance.

Photo by Bernard Hermant on Unsplash

Fish filets in fresh, frozen, dried, or salted format were collected to determine if the common name was accurately represented in relation to the species of fish. CFIA inspectors collected fish samples at domestic processors, importers and retail establishments (fish packaged at retail). The Ministère de l'Agriculture, Pêcheries et l'Alimentation du Québec (MAPAQ) collected retail samples in Québec. From April 1, 2019 to March 31, 2020, 362 samples were collected from across Canada.

The samples were tested at a CFIA laboratory using DNA-based fish species identification testing. This method compares DNA of samples against DNA barcode sequences for known fish species contained in a database.

The results showed that 92% of the samples tested were assessed as being satisfactory. Oceana, a nonprofit seafood conservation group, did a study back in 2015 and found that 43 percent of the salmon they tested was actually mislabeled.

Most of that salmon fraud ― we’re talking 69 percent of it ― mislabeled farmed salmon as being wild-caught salmon, which is typically more revered. That means you could be paying for a wild-caught Pacific salmon filet, when in fact you’re getting Atlantic farmed salmon.

Other fraud in the salmon market occurs when “one type of wild salmon is substituted for another, like the cheaper chum salmon or pink salmon being sold as a more expensive salmon like coho or sockeye,” Kimberly Warner, chief scientist at Oceana, told HuffPost.

Most of the fraud happens at restaurants.

Oceana found that most of the fraud from their study occurred at restaurants (67 percent vs. 20 percent at big chain retailers). Smaller grocery markets were also often guilty of salmon fraud. Big chain retailers are your safest bet for getting the salmon you actually want. But it isn’t always restaurants or markets pulling a fast one on consumers.

Sometimes the restaurants and retailers are the victims.

“What we’re dealing with is two different types of fraud,” Gavin Gibbons of the National Fisheries Institute told HuffPost. “One is species substitution, where the retailer or restaurant is the victim. They’re being defrauded because the person selling them the salmon tells them it’s one thing when it’s not. The other side of it is menu mislabeling or just mislabeling in a retail establishment, and that’s when they say it’s wild-caught salmon but they know it’s farmed salmon. So there’s two distinctly different things, but they’re both fraud.”

Read more…
Seafood mislabeling continues to be a significant issue throughout the world, according to an extensive analysis by the ocean conservation group, Oceana.
Read more…